The Net Worth Gap Between Homeowners and Renters Is Widening 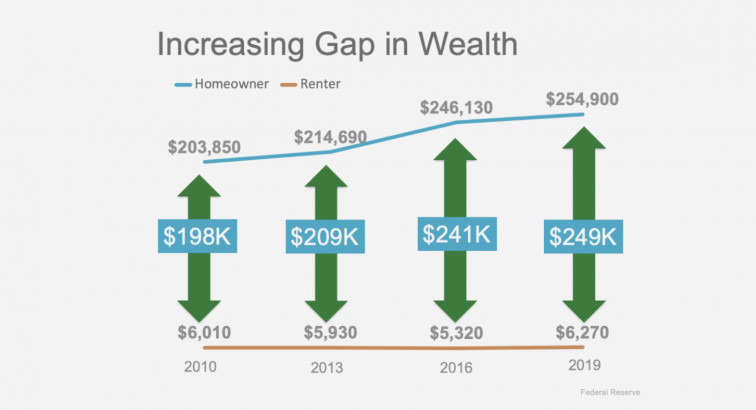 According to a recent report, the net worth gap between homeowners and renters is widening. A recent study shows there may is a growing misconception about homeownership in America. The Journey Toward Financial Freedom is reporting that a growing number of Americans believe homeownership is one of the indicators that is least connected to financial health and wellness. This is a growing concern as the difference in net worth between homeowners and renters is widening.

Americans eager to find financial security should place homeownership as a top priority. Homeownership and net worth work hand in hand toward your financial goals.

Increasing Gap in Wealth: Homeownership is the cornerstone.

The Federal Reserve, every three years, releases the Survey of Consumer Finances, which recognizes the difference in wealth between homeowners and renters. The Federal Reserve released the graph below with their findings. The gap between homeowners and renters continues to widen year after year. Deputy Chief Economist at First America attributes homeownership as the single biggest contributor to the increase in net worth across all income groups. The average homeowner's net worth is more than 40 times greater than that of the average renter. That gap will continue to widen so long as the average American believes there isn't a correlation between homeownership and net worth. Renters never see a return on the money they pay out in rent every month. Conversely homeowners, in essence, have a forced savings that comes back to them when they sell their home or refinance.

Nebraska Realty is here to help future homeowners build their net worth. Owning a home provides a cornerstone for building individual wealth over time. Those interested in building their net worth and live in Nebraska or Iowa should click here to learn more.