Don't Screw Up That Thanksgiving Turkey 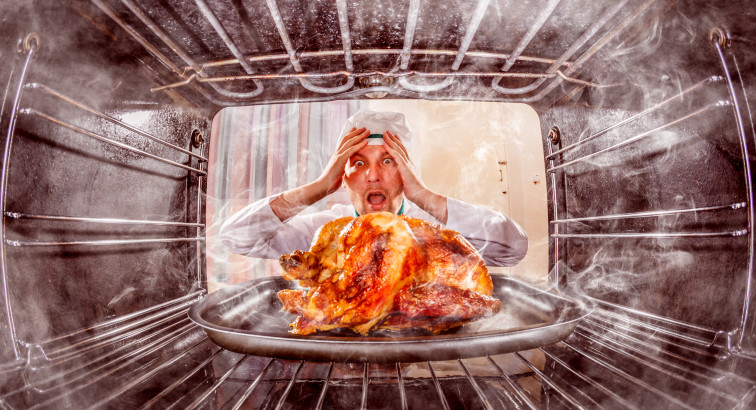 While it may be joyful, Thanksgiving is undoubtedly a stressful time — especially this year amidst COVID-19 concerns. And, let’s be frank —whether it’s a friends-giving, traditional Thanksgiving with family, or potluck with coworkers, there are a lot of opportunities to screw up the meal. To save you time and embarrassment, we picked up some tips and tricks to share with you from a couple of seasoned experts.

Helping U Barbeque are recognized nationally for their barbeque prowess, countless awards, and their expertise. Located near 156th and Dodge in Omaha. Owners Ron Rauert and John Meyer opened their niche barbeque store nearly 10 years ago in hopes of helping people just like you not screw up your Thanksgiving Day Turkey.

We did reach out to a few of our resident chefs at Nebraska Realty, too. Chuck Burney, reminds us of the old adage that if you fail to plan you plan to fail — as cliche as the saying is, it’s the foundation of pulling off a meal of this size. Chuck typically relies on his trusted oven-roasted turkey method of cooking but is feeling a bit more adventuresome this year. Chuck is attempting to smoke his first Thanksgiving turkey.

Rauert applauds Burney’s choice to smoke his first turkey and says that he hears a lot of people getting stressed because they’re using cooking methods or recipes, they’ve never made before, and they don’t know how to handle it all at once. Because people cook a turkey so infrequently, turkey can be the biggest potential downfall of Thanksgiving, but Rauert explained that there are several rules to follow to keep disaster from happening. Chuck, are you listening?

Ron has been on the competition BBQ circuit for over a decade and has a long list of credentials including competing at the American Royal. Despite his BBQ pedigree, Rauert and his partner John Meyer take pride in helping competition teams, backyard enthusiasts, and the seasonal chef. One of the busiest times of the year for HUB is Thanksgiving and one of the first questions everyone asks is, what size turkey should they buy.

Buying the Correct Size of Turkey

Rauert is a proponent of brining your turkey unless it’s a Butterball.

“There are tons of recipes online, but the brine will add flavor and moisture to the turkey. The brine will also permeate the cells of the turkey and the moisture will become trapped inside the meat.”

Helping U Barbeque sells a wildly popular poultry brine at their brick and mortar store located at 15791 W Dodge Road in Omaha.

Helping U Barbeque advises their customers to ‘Spatchcock’ the turkey. By removing the backbone and splitting the bird, you increase its surface area, allowing it to cook more evenly and in less time. Spatchcocking—also known as butterflying—is particularly brilliant and allows more surface area to the smoke and heat.

Start with a dry surface and be sure to season both the inside and skin side of the Turkey. Helping U Barbeque has a seasoning sampling station and can help you pick a seasoning that’s perfect for your individual flavor profile. Rauert likes to have fun with his seasonings and has been known to mix and match a few along the way. Those more adventuresome, like our very own Chuck Burney, who decide to smoke a turkey will want to run the smoker at 275 degrees. Using more of a traditional method? Rauert recommends never going above 325 degrees. Your grandmother probably taught you this but tent with aluminum foil If the skin is starting to get to brown. The finished temperature in the breast should be 165 degrees and 180 degrees in the turkey thigh. Oh, and despite its name, don’t put the stuffing inside the turkey. “Make it separately,” he said. “It dries everything out. Make your stuffing separately.”

This is the real test. Brian Carlin, one of our Veteran agents and self-proclaimed handyman, shared a recent story from his past with us. “Turkey, stuffing, green bean casserole, apple pie. The menu was set in a quick fashion. Feeling a bit of the holiday spirit I stood up with full confidence and suggested that I try my hand at cooking the fatted bird.  During a noticeable pause in the conversation and after careful thought, my mother in law, without a hint of sarcasm suggested she learn how to use the chop saw and rebuild her porch this weekend. I clearly understood and silently resumed my place on the family room floor wrestling with the kids.”

The number one rule of thumb before carving is to let it rest for 30 minutes. This resting period will allow the juices inside the turkey to redistribute. Now, with a sharp knife, cut across the turkey breast across the grain, and be sure to only carve as much Turkey as you need to serve each guest. The turkey will hold more moisture if it is not sliced.

Molly Amick, a member of the Nebraska Realty Kindness Crew & veteran agent, has fond Thanksgiving memories growing up. “Waking up to the rich smells of a perfectly stuffed, 23 lb. turkey that my very traditional mother had been thawing for days and up at 5 am cooking. Watching football, playing cards with Grandma, and spending the entire day with extended family was truly the tradition for decades. Thanksgiving has looked a little different in years of recent with early Black Friday shopping, multiple dinners, and Thanksgiving dinners getting smaller with family as our brood has grown. This year with the pandemic, I'm looking forward to slowing down, intimate dining, and going back to a quiet more traditional thanksgiving, where gratefulness seems to be at the forefront of the holiday in such a crazy year.

Despite the COVID craziness this year and the smaller numbers at gatherings, there are still two mistakes many hosts struggle with — keeping everything warm and staying calm. The planning ahead as Rauert suggested should help with both, but there are a few other things that may help the food stay hot and your demeanor stay cool.

“Do as much as you can before your guests arrive,” Rauert added. “That way, you can focus on hosting instead of cooking when guests are there.”

He also stressed to accept help when you need it or when it's offered. And, while you’re entertaining, you can keep everything warm in the oven at 200 degrees, wrapped in aluminum foil. If you run out of oven space, many dishes can stay warm simply by sitting wrapped on the stovetop.

And remember — the host sets the tone for the day, so if you’re calm, your guests should be too.

Helping U Barbeque has extensive hours throughout the holiday season. Ron and John are readily available to answer your questions over the phone or in-person at their store located at 15791 W Dodge Road in Omaha.