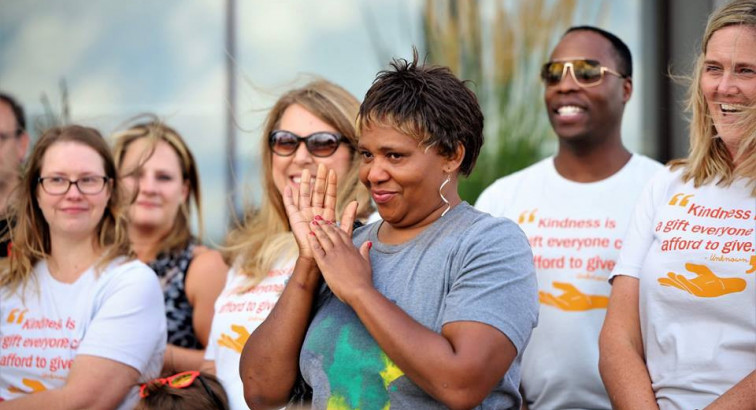 One Crew + One Car = One Family’s Independence

In the case of the recent car blessing through Nebraska Realty, people came together from a church, a real estate agency, and a non-profit, all for the sake of one woman who needed the support of her community. Sue was in a bad car accident. Thankfully, she wasn’t injured, but her car was rendered completely unusable as a result. She could no longer drive to her job at her church’s daycare, and as she prepared her children for back-to-school, she would have to turn to Uber to transport her teen sons to school.

Then one day, the dominos of blessing began to fall. One of Nebraska Realty’s Kindness Crew members met Mimi from Chariots4Hope. She brought the idea to a Kindness Crew meeting and the decision was made to do a fundraiser to support the Jump Start program at Chariots4Hope, which provides funds for repairs to donated vehicles. They knew it was a big idea that would turn into a big blessing. Within a week, a Nebraska Realty agent offered up a car which eventually did not work out, so they continued on with the fundraising efforts. Eventually, another agent came forward with a car that was in great condition and would be the perfect way to bless someone in the community. The fundraiser, which consisted of a good old-fashioned bake sale, a cooking contest, and a fish bowl set on the lobby counter to hold loose change and miscellaneous bills from passers-by ultimately net them $1,600. The Kindness Crew knew nothing about Sue, or had any idea who might receive the blessing of a repaired car in the future. They simply wanted to help an organization they knew was making a difference in so many lives.

In fact, the Nebraska Realty Kindness Crew didn’t learn who the recipient of the car would be until just days prior to the blessing. When the day came, they topped that car with a big bow and joyfully handed the keys to a faithful servant of her church, a mom who wants to get her children to school, a woman who would once again know – and appreciate – the independence that comes with having a car.

“Nebraska Realty really did open the door for her to have that self-sufficiency back again, and opened the door for another organization to walk alongside her and build her up. Sue couldn’t believe all those strangers were there for her,” said Michelle Hurt, co-founder of Chariots4Hope. Michelle went on to say, “Nebraska Realty already had this in motion and God’s timing was so perfect for Sue to receive it. It was beautiful for Nebraska Realty to see the work they did and to see their donation in motion.”

When people come together for the good of others, only good can come from it.

The Nebraska Realty Kindness Crew was organized to create hands-on activities to bring agents and their families together to make a positive impact in their community. It’s not only about fundraising – it’s about teamwork. They seek opportunities to roll up their sleeves and invest sweat equity into the needs of others. Kelly Jourdan from the Kindness Crew said, “It’s our goal to get out into the communities where we have offices and truly make a difference. Our agents drive the actions we take to do hands-on work to help out.”

She said their team t-shirts sum it up nicely. The quote on them says, “Kindness is a gift everyone can afford to give.” In a time where fundraising is often a big focus, that quote is a great reminder that we all have something we can give, even when we think we have nothing.